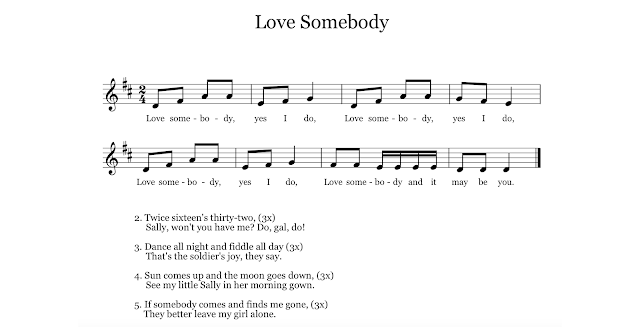 The game suggested by the Holy Names University’s website is as follows:

One child is chosen to be “it”. He thinks of the name of someone in the class, but does not tell the others. At the end of the song, three other children take turns trying to guess the secret. If no one guesses, the original child remains “it”. If the secret is guessed, the child who guessed becomes “it”.
Here are a few small modifications I would make for this game:
I would make these modifications for three reasons:

This song is great for practicing do-mi-so. Students could have an extra opportunity to internalize this pitch pattern if you play the melody on Orff instruments, bells, or Boomwhackers™. Personally, I envision this being played on barred instruments, with students alternating each section. The visual below gives an example of how I might split this up for students to perform in class.

By breaking this up into sections, it will seem less intimidating for your students. Once they’ve mastered one section, you can have them switch and try the other. After performing this on barred instruments, your students will have experience in playing do-mi-so, as well as do-re-mi patterns.
Additional grouping ideas
I hope these lesson ideas give you some inspiration as we get closer to the month of February. What songs and games are you looking forward to teaching next month? Share your ideas in the comments section. I’d love to hear from you!