Have you ever wondered how I create the stick and standard notation I use in my resources? I use a font I purchased from MusicTeacherTools. 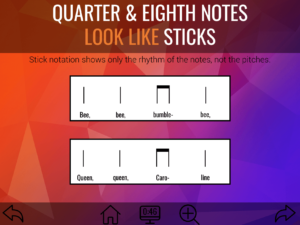 times I’ve used this font. It’s why I can create visuals like the ones below quickly and easily. If you create a lot of your own visuals for class, and you’re wanting something that’s quick and easy, this is it!

I really struggled coming up with a list of favorites this month, so I asked for suggestions for over on my Facebook page. Lo and behold, a follower mentioned Canva, one of my favorite tools to create graphics. I’ve been using it for years, but I still go back to it every now and again for inspiration.

It’s incredibly user-friendly, with pre-made templates for everything from social media posts to resumes, posters, and flyers. You also have the option to choose your own dimensions. The best part is, it’s all free! If you make your own program flyers or student worksheets, I would highly recommend giving Canva a try!

The volume of murder-mystery shows on TV is overwhelming. Most are sub-par, the kind of show you watch when you want to avoid spring cleaning. And yet, I’ve found two that have consistently raised the bar: Miss Fisher’s Murder Mysteries and Father Brown. I know I’ve mentioned Father Brown before, but a new season was just released on Netflix, so I’m counting it!

I love nearly all shows that include a strong female lead, and Miss Fisher’s Murder Mysteries is definitely that! The show is set in 1920’s Australia, following the main character Phryne (pronounced fry-knee). She’s cunning, kind, and has a backstory that makes her obsession with solving mysteries believable. The supporting characters are also multi-dimensional, with their own strengths and foibles. If you’re into murder-mysteries, or just want to see some elaborate 1920’s fashion, this show is worth checking out.

Ever since publishing my Basics Bundle, and reading all the amazing feedback I received from it, I’ve been planning the next level in the series. As with any music education resource I create, it’s a slow and methodical process. I maintained the same objective as in the original series; students hear, feel, and see each concept with real-life images, videos, and play-along recordings. And since it’s the next level in the series, I delved deeper into rhythm with quarter and barred eighth notes. This is the Basics of Quarter and Barred Eighth Notes.

Of all the resources I’ve created in this last several years, this one has taken the longest. Mostly because I had to create my own videos for the slideshow. Why should you care? Because I posted all the videos for free on Youtube! Visit my Youtube Channel to see examples of stick notation (as shown in the video below). There’s also examples of iconic and standard notation using quarter and barred eighth notes.