Today we’ll be exploring a new song, and a mysterious one at that. I sourced this piece from my grandmother’s music textbook (copyrighted in 1946), The American Singer Book 5. 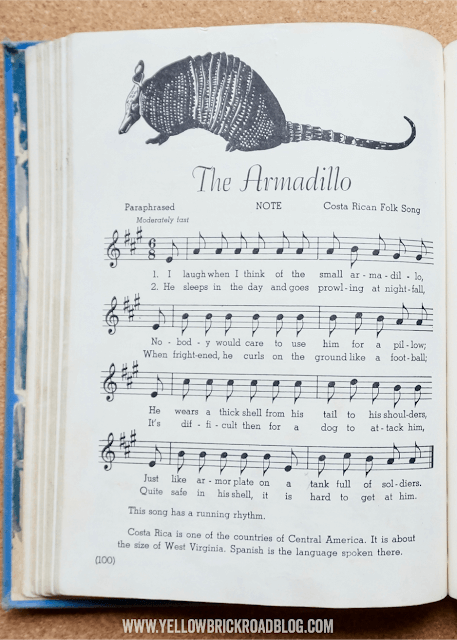 I researched the song, hoping to find some history behind its origins. Therein lies the mystery. This song doesn’t exist beyond this textbook (according to the internet). In fact, I only saw it mentioned in one place, the remote section of a quilting blog. One of the commenters discussed how they sang this song to their children while camping. They said that it was a song they remembered from their elementary music class. I’m guessing they too used The American Singer Book 5.

If you know about the origins of this song, please solve the mystery and let us know in the comments section!

I went to our state conference last weekend and had a wonderful time. Emily Maurek presented a great session covering a research-based approach to creative movement. It reminded me of the importance of its place in elementary music curriculum.

With that in mind, I’ve composed some movements to go along with The Armadillo. My goal was to represent mood, high/low space, and cross-lateral movements.

He wears a thick shell from his tail to his shoulders
•crouch down to touch the floor, then stand up and touch shoulders

It’s difficult then for a dog to attack him
•on all fours on the ground, stretch out one hand to mimic a scratching paw

I’ve created a video, which you can play as you guide the students through the movements in the song.

Your students don’t need to sing along as the video suggests. This song would be a tongue-twister for the little ones. However, if you introduce it a few times each year, your older students may enjoy singing it as a challenge.

Again, if you know the origins of this mystery song, please let us know in the comments section. Have a wonderful rest of the week!