Walking Up the Green Grass 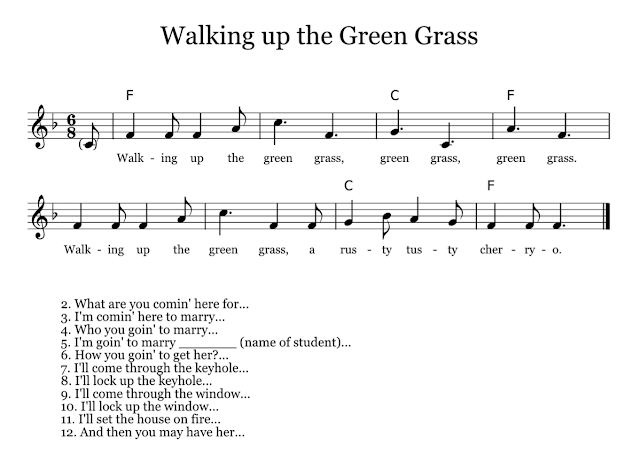 But it won’t feel like spring around here for at least another month. Until then, I’m going to include lots of movement in my lesson ideas. This segment, recently aired on the Today Show, reminded me of how powerful singing and dancing can be. The dance featured below is a simple one that you could include in a variety of grade levels.

The following description of the folk dance for this song is from the  HNU’s Kodály Center Website:

Game Directions
Formation: Two lines of children (A and B) facing each other, with enough space in between to advance and retreat. Verses alternately sung by Line A and Line B. As the line sings, it advances toward the other line during the first half of the verse, then returns to its place during the second half.
After “then you may have her,” the child whose name was sung in verse 5 joins Line A. The next time through, Line B begins singing the first verse.

My Spin
The same as above, except both lines move forward during the first half of the verse. Then, students swing with the person across from them and switch places. This continues until the fifth verse, during which the chosen student and their partner sashay down the middle. The rest of the students remain in their places, and they all begin again. 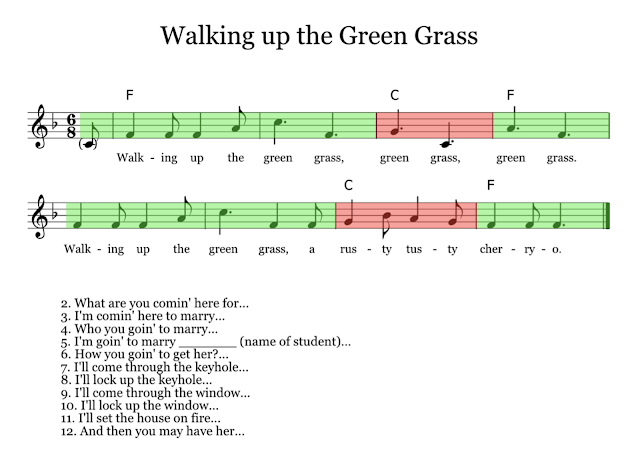 Try splitting students into two groups. One group will play the accompaniment, while the other group sings and dances. Record their performance and show it during parent-teacher night. You could also perform the piece as part of an informance.

Feel free to use the video below as personal reference or as a part of your lesson plan. If you haven’t already, be sure to subscribe to my channel on Youtube for videos you can use in your classroom.

What song or piece would you like to see me feature next on my blog? Leave your answer/s in the comment section below.