One of my favorite lessons to teach every year was Miss Mary Mack. I taught the clapping game and song starting in second grade, and it was easily one of the students’ favorites. In fact, I often heard their homeroom teachers turning the lesson into a verb, as in “No Miss Mary Macking in the hallways please.” I got a secret thrill out of knowing that they were using what they learned in music outside of the classroom (even if it did drive their teachers bonkers). 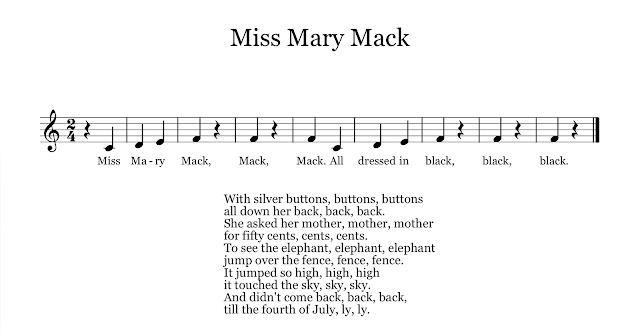 You could modify Miss Mary Mack for younger students, but I would suggest saving it for second grade or older students. In the meantime, here’s an alternative activity for crossing the mid-line with younger students. I think kindergarteners would love this!

*this is the version I used, which crosses the midline more than other versions I’ve seen.

The video below shows the version I always played with my students.

When it comes to teaching clapping games, my best advice is to go slowly, and break this lesson up into several class periods. If you think some students are getting bored of the repetitions, then mix it up with a different tempo, face a new direction, or practice the moves laying down on the floor (always fun for kids).
I think it’s important that they do these moves on their own at this stage. This way, they aren’t distracted by their partners. Also, it gives you a chance to work one-on-one with some students. Just make sure you keep moving around so as not to draw attention to any one student. I usually ended the lesson here, to be taken up again the next time I saw them.

I continued to sing the song throughout. Usually my students started singing with me (unprompted). At this point, I dropped out little by little until they were singing completely on their own.

You can use the clapping game to teach different tempo markings. There’s a recording of Miss Mary Mack in Silver Burdette’s Making Music Series, which starts off slowly, then gets faster each time it repeats. Whether you’re using a recording or not, call out the name of each tempo marking before students begin. I would suggest starting with the slowest tempo and then gradually getting faster.
After students have practiced this several times, you can make a game out of it. Call out a tempo marking and have students match that with their clapping game. If they’re really far off from the tempo (going presto in a largo), then they sit down for that round. Or have students call out the name of a tempo after you’ve given them a starting beat. Elimination games aren’t always the best choice for every class, so do what works best for your students.
Have you played Miss Mary Mack with your classes? What other hand clapping games have you tried? I’ve love to hear about your experiences in the comments section below.