All Around the Buttercup

All Around the Buttercup is a folk song with an easy game that you can play with your kindergarten and first grade students. The song works well for practicing quarter rest, as well as practicing re. 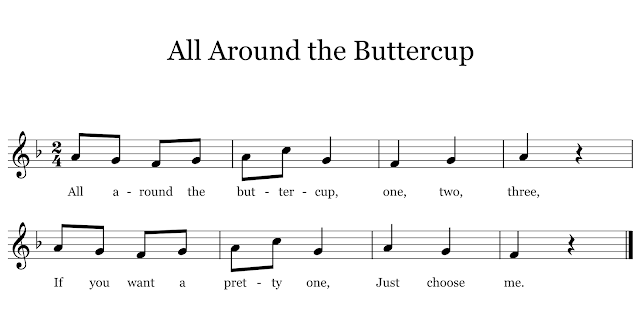 This is one of those activities that I always called a “game”, even though it didn’t really fit an adult’s definition of game. My students never noticed, and my kindergartners especially loved simple games like this, which is reminiscent of the game that’s played with Bluebird, Bluebird (or Little Bird).

To play, students stand in a circle with hands joined and held high. One student, “it”, is chosen to weave in and out of the circle. Once the students sing “just choose me”, “it” chooses one person. They join hands and resume weaving through the circle. This continues until only one student remains.

If you have a bee puppet, you could give it to the leader to hold high as they weave in and out of the circle. Then, they can pass it on to the next person, and so on, until everyone has had a turn.

The benefit of using this song and game in kindergarten, is that you can introduce it again in first grade to teach quarter rest. To reinforce the concept of rest, ask students to lower their hands and put one finger to their lips during each rest.

You can begin a class discussion on the concept before formally introducing the term. You could even use this as an opportunity to “pair and share”. Give each pair of students a few moments to discuss question, such as:

What did you notice about the song when you put your finger to your lips?
Were you singing on that beat or were you silent?
Do you think silent beats are part of the song?
If we wrote a silent beat down on paper, what do you think it would look like?

Following this discussion, you can formally introduce the quarter rest and show students what it looks like. Click on the image below to download a free copy of my Tracing Rests Worksheet. 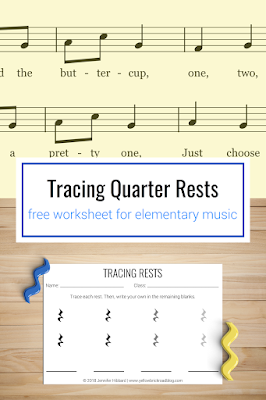