As a serious soup-lover, I’m surprised I’ve never featured this song on my blog before. Pease Porridge Hot is a well-known nursery rhyme that works well for teaching several different concepts in the music room. Today, I’m going to focus on the clapping game and the concept of quarter rest using Pease Porridge Hot.
Click on the image below to download the notation for this song, along with a visual for the clapping game.

Directions for the traditional clapping game are shown in the visual below. Click the image to download it and project it on your whiteboard for your class. 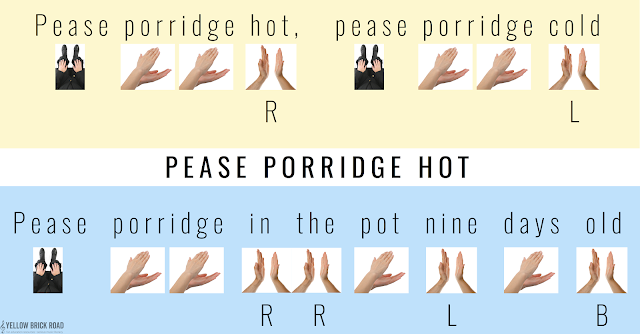 One of my favorite activities for clapping games (or any kind of steady beat movement) is to have students create their own. Not only does this align with our “creating strand” of core standards, but it’s student-centered. As a result, students are more engaged.
Students will have the traditional clapping game as their foundation, which serves as a good model for the type of body percussion they can use in their own clapping game creation. Here are a few parameters you might consider before setting the students loose with their creations:

Pease Porridge Hot is a great song for practicing the quarter rest. Students will have already practiced the rest with their bodies, since they had to pause for the quarter rest during their clapping game. You might try the following motions to reinforce the concept of a quarter rest.
The idea with these motions is to create length without sound. This is so that students understand that rests are silent, but still take up space and time within the music.