Draw a Bucket of Water

Draw a Bucket of Water (sometimes known as Sugar Bowl) has a plethora of variations, with differences including time signature, key, rhythms, and pitches. Normally, I would use the version found in HNU’s American Folk Song Collection. However, for today’s purposes, I’m going to use the version that most often accompanies the game (as shown below in the video). That way, if you plan on trying this song and game in your classroom, you’ll already have the notation ready to go. 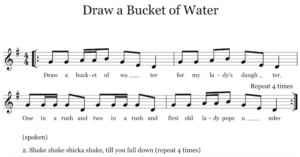 As with the song itself, there are slight variations in the game as well. In the following video, you can see a more traditional version. The reason I like this one, is because students are practicing steady beat by hopping at the end.

This next video is the one that accompanies the notation above. The reason this one stood out to me was the effective use of scarves. The scarves allow the students more space to move, more opportunities to show steady beat, and cuts down on the transfer germs via hand-to-hand contact. Also, if your students prefer their own bubble of space in which to reside (as I do), then they’ll appreciate the personal space the scarf provides.

Last, but not least, I was drawn to how this teacher prefaced the spoken portion with a quick word of warning and a catchy phrase. You’ll have to watch it to see what I mean.

One of the great things about this song is that you can use it with a wide variety of grade and experience levels. We all know that students can never get too much practice with steady beat, and this song is great for that! Here are a few additional tips and ideas to get you started with practicing steady beat using this song and game:

That’s it for today’s post. I hope you’re inspired to try this game in your classes (if you haven’t already). Meanwhile, be on the lookout for my next newsletter, which will be coming out in the next few weeks. You can sign up for my newsletter HERE.