This is one of those rare songs that everyone seems to know. This is quite the feat since our lexicon of songs known by the general populace seems to shrink by the year. It’s also one of the first songs I ever sang in a round as a child, and so it’s particularly memorable to me. If you’re looking to familiarize your students with 6/8 time signature or would like them to sing in a round for the first time, this song is an excellent choice. 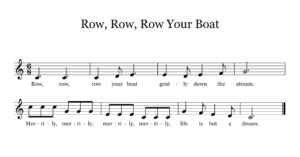 This song is wonderful for covering the rhythms in 6/8 time with third and fourth graders, as well as exploring songs in round. Row, Row, Row Your Boat is particularly well-suited to teaching 6/8 time signature because it has examples of one, two, and three sounds on a beat.  As with all repertoire, the grade levels in which you choose to introduce a piece depends entirely on your unique classroom situation.

To begin, model singing the song once or twice through. Then, show them a video demonstrating the song being sung in a round, such as this children’s chorus performing the song in round with the audience. If your students like Jimmy Fallon, you can show them this video, in which he and Justin Timberlake perform the round dressed as Michael McDonald (who also shows up in the video).

In my experience, it was always best to attempt singing a song in a round on the second day I saw my classes (I saw them twice a week). I felt that this gave them a better chance to become familiar with the song. I only attempted rounds when the students were completely comfortable singing it without me, and were able to model solid beat and pitch. Then, I continued with the following steps to have students sing in a round independently:

Usually by this time, students were eager to see just how many parts to the round they could create, and I happily obliged. It was also fun to choose a student conductor to lead. 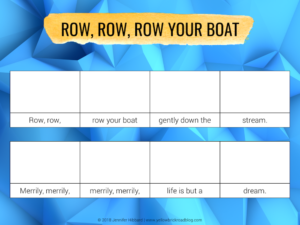 Once the song has been performed in a round, it’s a good time to dive more deeply into the rhythm. At this point, students will know the song well, and are more like to be able to identify rhythms. You can use my projectable to have students fill in the rhythms for each measure in the song.

Here are a few more ideas for using this projectable:

That’s it for today’s post, but I’d love to chat with you more over on Facebook. I also love hearing your responses to my newsletters, which you can sign up for here.